In the last issue, we discussed four types of dental implant placement depending on the degree of soft tissue and bone healing, see the table below.

And mentioned that for a long time the gold standard was the fourth type – delayed implantation. Indeed – it is the easiest way to place an implant. In addition, almost the entire block of data on osseointegration, primary and secondary stability is derived from surgeries performed exactly according to the fourth type.

It is also the most reliable and affordable way to perform implants, which is recommended for all beginning dentists. Minimal stress for the dentist and therefore also for the patient. 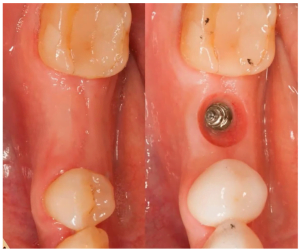 There are clinical cases where no other type of implantation is allowed. Here are a few examples when it is imperative to give the body time, patch everything up, and restore the alveolar bone.

The success of further implantation depends on how the tooth is extracted and what measures are taken to preserve the bone mass of the alveolar ridge. Let’s take it one step at a time.

We need to understand what happens to the alveolar bone during the healing process to predict whether horizontal augmentation will be necessary. We discussed the basics of the healing process in the first part of our review.
Now let’s figure out what is happening with the volumes in the oral and vestibular parts of the alveolar bone. To do this, let’s turn to the study of doctors Araujo and Linde from 2005.

The histological section below clearly shows that the height of the alveolar wall is almost unchanged on the oral side, see the solid line in the illustration below. Whereas the vestibular wall is dissolved to a large extent, see the dotted line.

This results in a relatively sharp ridge and a noticeable horizontal bone deficit. If you try to insert an implant into such a bone, several coils on the vestibular side will not be covered by bone. Horizontal augmentation (bone augmentation) is indicated for such clinical cases.

How to Change the Comb Remodeling Scenario

Observations of the aforementioned phenomenon of loss of ridge width have led to an increase in the popularity of the second type of implantation. Indeed, it makes sense to place an implant before a significant amount of bone is lost and preserve it in this way. But today we will look at the essence and effectiveness of techniques to reduce bone loss.

All the techniques that dentists use to intervene in the healing process and preserve bone mass have their origins in ridge reconstruction techniques.

For example, the image below shows a noticeable loss of bone mass from the side of the cheek. And the adjacent picture shows the process of horizontal augmentation, namely the bone material (graft) with a fixing membrane.

This is a well-established and quite effective procedure that allows you to obtain even excess bone. The picture below shows bone growth even outside the bone envelope.

A logical question arises. If you build up bone tissue when the tooth has been gone for a long time, then why not do something similar immediately after removing the tooth.

After all, every surgical intervention is a risk, not to mention a loss of time. First, it takes several months for the bone to heal, then it will be found that the width of the alveolar crest is insufficient, and a decision is made on augmentation. After that, several more months pass before implantation.

Before proceeding to the results of the studies, let’s analyze one case, see the photo below. The case is taken from open sources. We see a competently removed molar of the upper jaw. 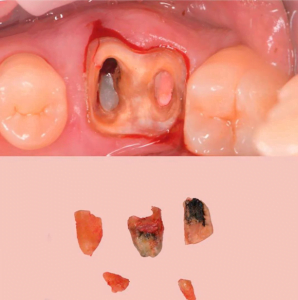 You can see from the scans that the doctor did a competent fragmentation and removed the roots of the tooth. And immediately after the extraction, an alveolar ridge augmentation surgery was performed, see pictures below. 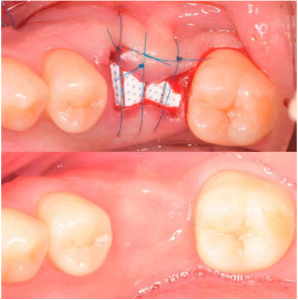 Unfortunately, we do not know what bone material was used, but we can see that PTFE membrane (non-resorbable barrier membrane) was used. As you can see the surgery was successful the healing of bone and soft tissue was perfect for implantation.

But then for some reason, the doctor placed the implant with a significant displacement to the oral wall. The healed area showed that the implant could have been placed in the center. The pictures below show the red circle showing the actual location of the crown to abutment and the blue circle shows the recommended location. 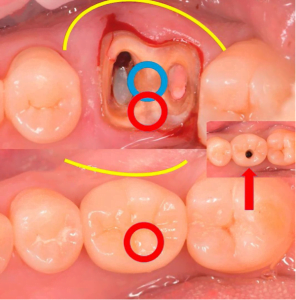 This raises the question of why the dentist did this. Everything shows an experienced hand. Perhaps the operation to save the ridge was not as successful as it seems at first glance, perhaps there was another reason.

Let’s try to figure out how much the procedure for preserving the alveolar ridge “unties the hands” of the dentist. To do this, we turn to research. Although it is quite difficult to understand this issue. There is a lot of conflicting data, and the statistical material for the meta-study was collected only by 2014. The very methods of preserving the alveolar ridge began to be used at the beginning of the 2000s.

We will first look at a systematic review from 2014.

The illustration below shows the difference between alveolar ridge formation: the upper row is when the tooth was extracted and nothing was done. The lower row is when bone material was placed in the hole. 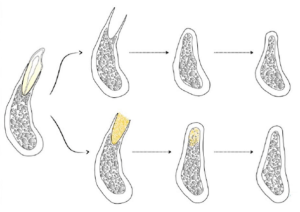 The results show that in the second case, the height and width of the alveolar ridge were largely preserved. This study unequivocally states that alveolar ridge preservation techniques work. Specifically, alveolar bone loss occurs either way. But in the case of preservation procedures, the average loss of alveolar ridge width is – 1.83 mm less.
This is quite a lot, because if the width of the alveolar ridge is 6 mm in the molar region, then it is no longer possible to place an implant with a diameter of 4 mm. And if it were possible to maintain a width of 6 + 1.83 = 7.83 mm, then this is already a good indicator and a 4-mm implant can be confidently placed.
But even here it was not without pitfalls. Here are the main conclusions that can be drawn from this study.

What is better for preserving the well: xenografts, allografts or PRF

We have already seen the general effectiveness of alveolar ridge preservation techniques. Now we need to find out exactly how effective they are and which materials show the best results.

As we have already mentioned, it works best:

Alloplastic materials work much worse – completely artificial ones based on calcium triphosphate and hydroxyapatite.

All of the above materials are also used in classical augmentation procedures. From this we can make a generalizing conclusion that the procedures for preserving the alveolar ridge are a special case of augmentation.

Now let’s move on to the main and most recent study on this topic. 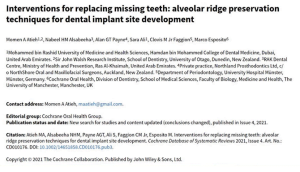 This is a fresh meta-analysis of the Cochrane group, which Dr. Atieh did with colleagues in 2021. It’s all about interventions after teeth are removed. That is, preparing the alveolar crest to preserve the maximum bone tissue and prepare for implantation.

This study is valuable in that both pre-existing previously systematic analyses and statistics on new clinical cases were used for it.

Here are the conclusions, and they are discouraging:

To be honest, the results are not what I would like to get, but the wording could not be clarified because insufficient data is not a verdict. Surely new studies and new methods will appear in the near future, which will show unambiguous results.

Before we get to the final conclusions, let’s look at one more material and technique. Namely, platelet-rich plasma. 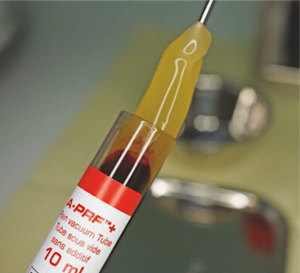 At the beginning of the spread of this technique there were enthusiastic sentiments that platelet-enriched plasma PRF could replace the membrane and almost the bone graft itself. Sellers of centrifuges and related products were especially fond of telling about it.

In fact, it turned out that platelet-rich plasma has no effect on bone healing. Neither harm nor benefit.

Still, the use of PRF plasma is not the pure child of marketing. It is successfully used to protect the blood clot immediately after extraction. And it practically reduces the risk of alveolitis to zero.

And that’s a lot, because alveolitis causes not just discomfort, but severe pain. And the treatment of alveolitis is quite complex and time-consuming.

Is it possible to save bone after removal

Let’s try to summarize. And find out why it is so difficult with certainty, because at the beginning of 2022 there were no clear correlations. To begin with, let’s formulate what we know for sure.

We have a rather positive attitude toward bone ridge preservation techniques. As confirmation, here is another qualitatively done study where there were test and control groups and a blind distribution.

The only comment on the quality of the results was that the difference in bone loss on the lingual and vestibular sides was not shown. This is important for subsequent implantation.
The alveolar ridge preservation procedure was performed according to the standard procedure using OsteoBiol bone graft and membrane. 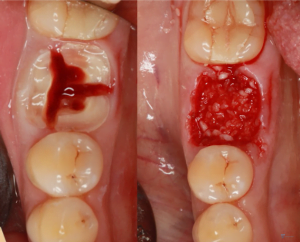 As we can see, the probability of augmentation in the test group is only 7%, whereas if nothing is done, after six months almost half of the patients will have to undergo augmentation.

At first glance, everything looks great, except for the financial issue. After all, an elementary extraction is relatively inexpensive. And a tooth extraction with an alveolar ridge preservation procedure is 2-3 times more expensive.

And in the test group, intervention was performed 107 times – (7 cases twice). From a financial point of view, the group of patients where the alveolar ridge preservation procedure was performed would bring in more than 2.5 times more money compared to the control group. Or if you evaluate on the other hand the patients will spend several times more.

Therefore, the final conclusions and recommendations from us will be. 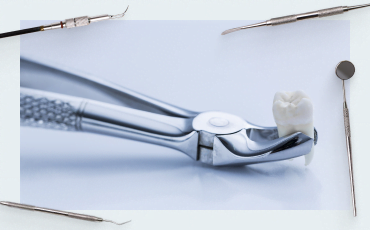 Cases
Tooth extraction, healing implantation (part one)
Basics of alveolar bone anatomy At the very beginning, it is worth agreeing the terminology because, unfortunately, even in serious publications you can find wording like: “the alveolar process of the lower jaw”. This is incorrect. On the lower jaw, the alveolar part is isolated, as well as on the upper jaw. The term “alveolar…
Read more 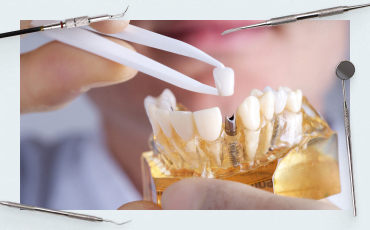 Cases
How to check implant stability (whether the implant has “taken root”)
How long to wait after an implant is placed? Secondary stability is achieved when the living bone at the cellular level attaches to the implant surface. Usually 6-8 weeks is enough for this process, but in practice it often happens that the implant cannot be loaded after this time. Let’s see if more time is…
Read more 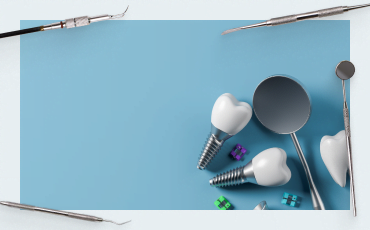 Cases
What to do if the screw in the implant breaks
How often does the screw break? A complex bashing of the abutment screw when part of the screw remains in the implant shaft, although complex is quite rare. There are statistics about it that were announced at the ITI conciliation conference in 2004. A huge amount of work has been done to study all types…
Read more
Discount
For your first order
if its total $300+
Promocode
Leave us your email
We will contact you ASAP
By using our website you agree to the Privacy policyOk